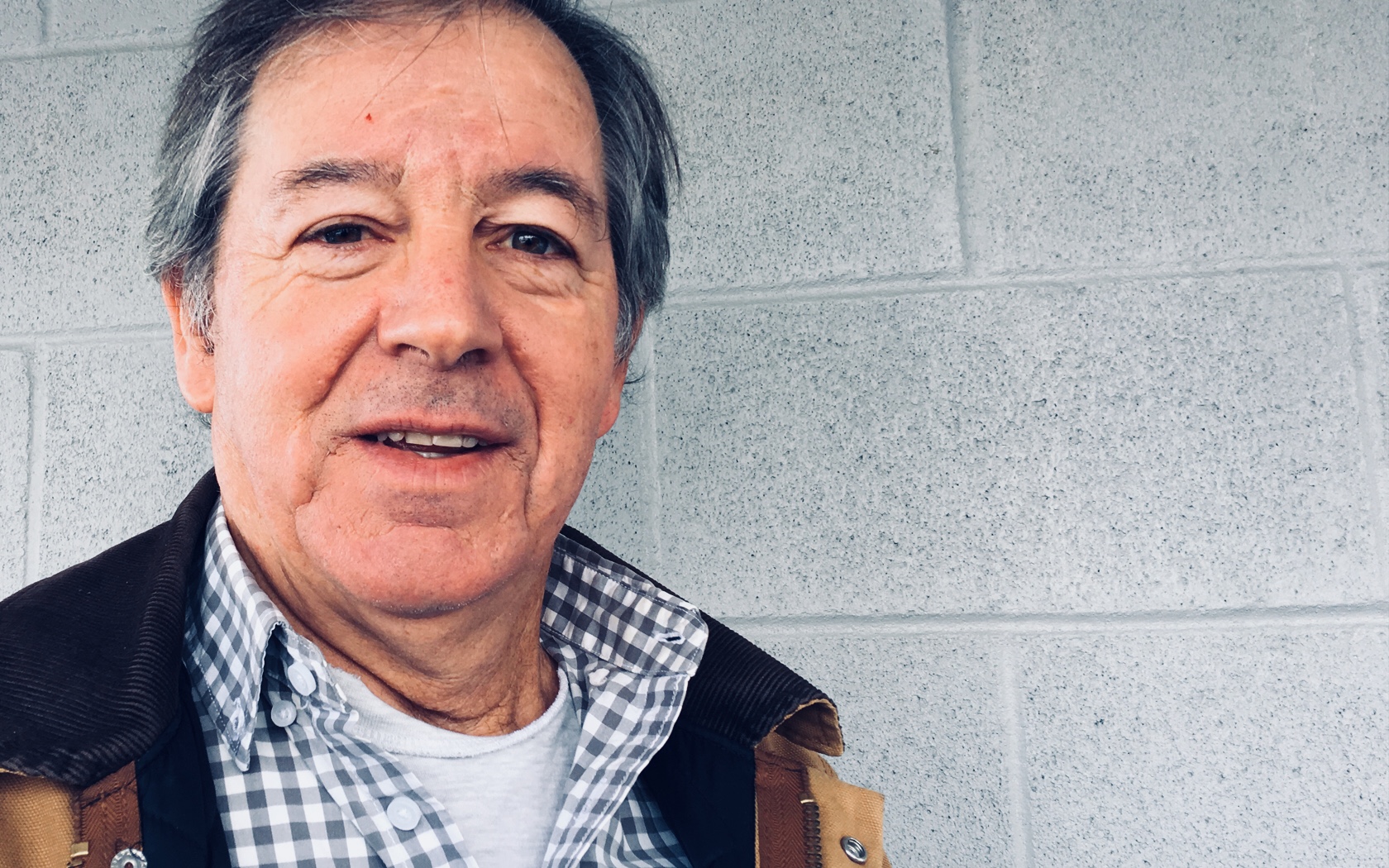 John Schmid is the most recognized musician in my area in Ohio. He strums country gospel with his Martin guitar, heavily influenced by Johnny Cash. He commonly wears a white shirt. Black jeans. Black boots. He’s worked alongside well-known musicians and ministry folk over the years including Steve Chapman and the outspoken ‘Flip’ Benham. He’s an incredible storyteller and I heard him relate a firsthand of the time he played Silent Night and it broke through to a thick and dangerous audience. I knew I needed to capture it.

John met Flip, an army vet and former bar tender, at the seminary he was attending in the 1970s at Wilmore, Kentucky.

The year before, Flip had owned a bar in Florida, where a persistent Christian evangelist would drop in and keep bugging Flip with the message of the gospel and Flip would keep kicking him out.

In John’s classic storytelling fashion, he noted, “I found out that when someone comes into your bar and talks about Jesus, sales go down.”

Bar customers’ consciences were pricked and they would only buy Coke, and that had a much lower profit margin. Whatever the case, Flip was irritated by the evangelist.

The whole episode of ‘evangelist bugging Flip, Flip getting angry and kicking him out’ played out many times. Once it got so serious he reported the evangelist.

Despite all the rage, somehow the message got through to Flip and he eventually listened and became a believer in Jesus Christ. He sold the bar and went straight to Asbury Theological Seminary, where John met him.

Asbury is a graduate school, and usually newbies would start their studies at a bible college to get a foundational and basic understanding of the Bible before studying at the graduate level.

Flip had no Bible background, but his classic style was to do everything ‘whole hog’ and he started off at Asbury—graduate level.

According to John, Flip was ‘pretty sharp but he was way behind’ in his Bible understanding. Flip couldn’t pronounce the biblical book of Deuteronomy and would pronounce the book of Job same as ‘day job’—the Book of job.

John and Flip were a tag team in a weekly ministry to soldiers based at the US Army Base in Fort Knox, Kentucky. Troops-in-training who would get bussed to Louisville each Saturday evening for a singing program then travel back after the program.

The soldiers were in basic training so John and Flip were the first civilians they would see for a month or two since they started their program. Many were homesick and John imagined their thoughts, wondering, what did I get myself into?, army is supposed to be fun.

The lady who ran the Fort Knox ministry program invited John and Flip to go to Germany to minister to American soldiers stationed there.

It was Christmastime and they moseyed off to Germany.

They were scheduled for an afternoon program and began setting up their music equipment for a program at the US Army Base named Ben Franklin Barracks in Heidelberg. The buildings were “temporary”, built in 1941 or 1942, but still temporary,  “I don’t know how temporary they are,” John told with a laugh, “In other words they were not classy buildings.”
While they were setting up for their program in the mess hall the soldiers began streaming in. They were angry. Cussing and kicking over chairs. John and Flip very obviously interpreted it to mean they didn’t want to be there.

They were angry. Cussing and kicking over chairs.

They found out that these soldiers had been on a bivouac, or campout, near Wildflecken, along the East German border at the time of the communist Berlin Wall. The soldiers were running their tanks around in the snow during the day, not only for practice but also to intimidate the East Germans, who watched everything the Americans and the West Germans did.

During their ten-day stint whenever they were free all they wanted to do was head off to Heidelberg city and meet some frauleins and guzzle high-powered German beer. Instead they were invited to this Christmas program—of all places.

John’s take would have been—if you don’t want to come, don’t come. “But that’s not how army invitations read,” John chuckled.

The program was more like:
Christmas program.
13:00 Hours.
Ben Franklin Barracks.
Be there.

“In other words, the spiritual fervor was not high,” he said.

As they were setting up John noticed a door in the back and he told Flip, “Let’s walk on back there and step outside and have a word of prayer,”

He had experience. He was an ex-bar tender. He was accustomed to dealing with this environment and this kind of people.

But there was a problem. They didn’t look at John or Flip. In their minds, John and Flip were the enemy. If it wasn’t for John and Flip they could be downtown living it up. That was the kind of attitude they exhibited.

He was struck with fear. “John, we can’t go back in there, they’re going to kill us.”

Flip is strong built and John laughed in response, thinking if anyone should be scared it should be John himself.

John recounts that if he knew then what he knows now he would also have been scared.

John has been in prison ministry for 25 years and he said there’s never been a prison riot that came as a surprise. It’s obvious something is brewing by the tension in the air, they just don’t know when the riot will break out.

Flip had been through bar room brawls and could feel the tension in the room in Germany.

John grew up in a conservative and sheltered area in Ohio and he thought everybody loved everybody. “I didn’t have enough sense to be scared,” he recalled.

“I was naive,” he confessed.

John’s professor back in Kentucky had just taught from the book of the Prophet Ezekiel where the prophet was sent to a people who were stiff-necked and they wouldn’t listen.

But the direction from the Lord was that the prophet should still deliver the Lord’s message—yes, even if they won’t listen. This was the prophet’s clear assignment.

Color came back into Flip’s face.

“Yeah—we don’t have to make them sign nothin’, ” was Flip’s relieved response. “We just go in there and tell them what God told us to tell them.”

They headed back in with a resolve.

The program started but the audience was in complete oblivion to the singing. “I sang and they didn’t listen,” is John’s recollection.

The soldiers kept talking to each other as though John and Flip weren’t even on stage. They were at tables, so half had their backs turned and and the other half were facing the stage, but they weren’t listening. They were all talking among themselves.

There was a window right behind the stage area in the dimly-lit room where they were serving refreshments.  The soldiers would stomp past to get refreshments—which was beer—ignoring John and his melodies entirely.

John secretly prayed, “Lord, if you get me out of this mess I’ll never do it again.” That’s how awful he felt.

John sang a few country songs but also sang some more serious gospel numbers. He looked at his watch and noticed he had filled the time he had been give. He decided at the end he’d sing a Christmas carol or two. Then Flip would share his testimony of how he became a believer.

Flip had been an American soldier at the very same barracks himself only a short time before. He knew how they might be feeling. He could speak their language.

He had left there, left the army and bought the bar in Florida.

Before launching into the Christmas carols, John told the story of how Silent Night was written on Christmas Eve in 1818 in Oberndorf bei Salzburg, Austria (which was about a half day’s drive from Heidelberg.). The organ had broke and a song was needed for the service.

The preacher had written a poem and told the song leader to write the music so simply that they wouldn’t need to rehearse, because there was no time.

Then John began singing. And that’s when it happened.

John began strumming, and then the words, Silent Night, Holy Night. It was like the flip of a switch. The atmosphere was instantly pierced.

As he began singing the four words, Silent Night, Holy Night all—yes, all—of the soldiers turned around and looked. All the angry soldiers who didn’t want to be there just minutes before were now in rapt attention.

John clearly remembers looking straight into one of the soldier’s eyes whose back had been turned. It was as though John had spoken the fella’s name, as soon as he began singing. Almost in shock.

There was a tear on everybody’s face.

They had been talking to each other but after those four words everything else went silent. It was almost like when a gun slinger walks into a bar, is what John recalls.

This had been 30 or 40 minutes in, and finally he had their attention. Finally, they realized he was there.

John never saw the atmosphere of a room change so dramatically, so quickly.

He was planning to sing only one verse. He sang the whole song. Then sang a few more carols. He introduced Flip. Flip shared his story of how he was in the army himself. Became a bar tender. Then a believer in Jesus Christ. And is now preparing for ministry.

Two of the formerly angry soldiers responded to the gospel message that snowy day in Heidelberg.

After the program ended several others came up and asked for more info on “this Christian stuff.”

When all was over the servicemen stood around and chit-chatted for a while. This time it was a completely different kind of chatter. A friendly and benevolent chit-chat. 15 or 20 minutes passed before the first soldier sauntered out the door to leave.

When I asked John what caused the dramatic change, he isn’t sure but he’s guessing it was brought about by either the soldiers’ homesickness or the Holy Spirit—or both. It was around Christmastime and Christmas-homesick could have been in the mix as well.

John’s simple recounting of the event is that before his very eyes a song indeed changed everything.

Since then, John has played Silent Night a thousand times and each time he remembers the one soldier who looked him straight in the eye that day in Heidelberg, Germany.