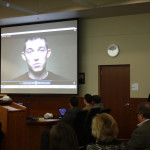 I Killed a Man: How Does Matthew Cordle’s Chilling Confession Affect You?

“I killed a man” is the line that is still reverberating around the world. A well-done YouTube video viewed several million times. Shocking. Awe-striking. Unbelievable.

What to make of it?

Is the confession impressive?

Is the video impressive?

Is this an attempt to get a shorter sentence?

One thing for sure: it got the attention of the world. 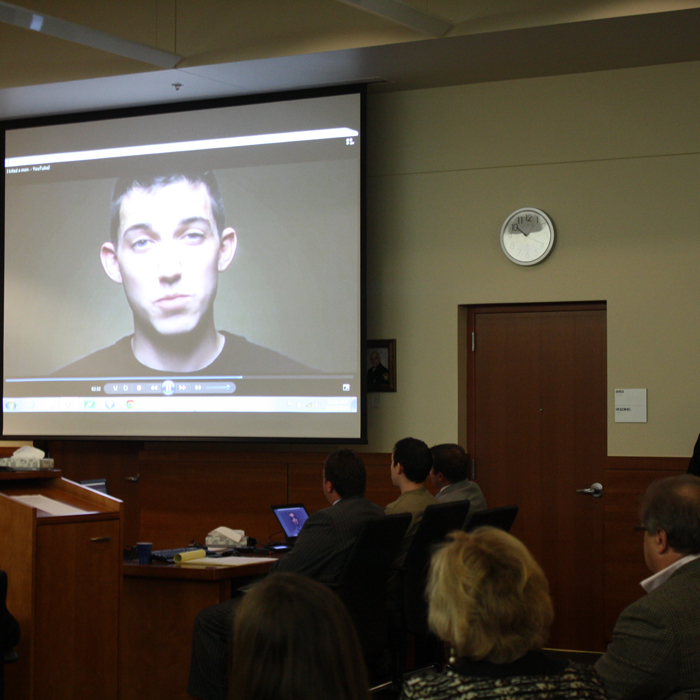 The man, Matthew Cordle lived about a hundred miles from my house. I was so struck by the case I drove to the courtroom where he was sentenced yesterday to see it firsthand.

That night
It happened about 3am, June 22, 2013. Mr. Cordle was drinking with friends. Then hopped in his Toyota Tundra and drove. Well, kinda.

He was on Interstate 670 near Columbus, Ohio barging into oncoming traffic until he hit. All banged up, 22-year-old Matthew Cordle was sent off to a hospital with broken ribs and a fractured skull. Later police informed him he had killed a man.

A moment for real friends to shine.

Poster child
The Judge David Fais yesterday suggested a billboard with Matthew’s picture should be erected in the Columbus area as we move into the upcoming holidays. It should show him with the words that he killed a man and is in prison because of drinking and driving. Per an interview by today.com Matthew is willing to be the poster boy for such a campaign.

What was his response to Judge Fais’ sentencing? “Relief”.

Matthew said he is relieved that he has been sentenced and this thing is finally over.

Vincent Canzani’s daughter Angela testified to the court saying, “My father got a death sentence and did nothing wrong.” She noted after 8-1/2 years Matthew can come out and will still have his whole life ahead of him. Her father would never get his life back.

When Matthew was asked earlier today how that statement made him feel, his response: “It’s heartbreaking, because every word she said is true.”

I consider him a man of courage, bravery, and responsibility.

Before I left I had a chance to speak briefly with Dave. A very gentle and cordial man. I just wanted to connect with him and encourage him.

Video
When I first saw the video earlier this month on churchleaders.com I was awestruck. Absolutely amazed.

The video is about 3-1/2 minutes long and, as of today, has been viewed more than 2.4 million times. One of those times was in the courtroom yesterday.

I know there are varying opinions on what Matthew should have done in response to the killing but he did this. He confessed. “I killed a man.”

What caught my attention the first time I watched the video was the clear responsibility he took for his actions. He isn’t able to bring back Vincent Canzani but he was moving forward by taking responsibility.

In the video he said, “When I get charged I’ll plead guilty and take full responsibility for everything I’ve done to Vincent and his family.”

After I had watched the video I tweeted: 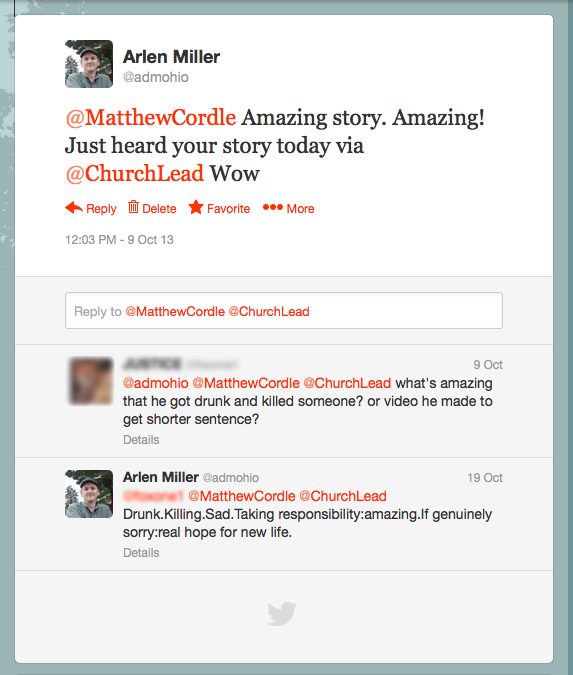 I discovered there are opposing views of what Matthew’s motives may have been for creating the video.

It is very sad indeed for the victim’s blended Oates and Canzani families who have faced the death of their loved one. Very sad.


Because I said I would
On August 9, Mr. Cordle reached out to the Facebook page named BecauseISaidIWould, asking for help. I just saw that message today. Matthew wrote: “I would like to join your dream to make the world a better place. I was responsible for a drunk driving accident that caused a fatality at 3am on June 22nd of this year. The guilt is almost insurmountable at times knowing the ripple of suffering I have caused in so many lives.”

He went on to write that he sees it as his duty to live out his life and “create a positive ripple in as many people as [he] can reach.” He was asking for help with how to do it.

After discovering this message today, it gives me even more hope regarding the sincerity of Matthew’s YouTube video confession.

Yesterday when it was Matthew’s turn to speak before he was sentenced he said, “Whatever my sentence may be there is no such thing as a fair sentence when it comes to the loss of a life. The true punishment is simply living. Living with the knowledge that I took an innocent life.”

He went on to say to the families that he is “so sorry for the pain I have caused you” and “it should have been me that night, the guilty party, instead of an innocent man” with a writhe of emotion.

He ended by saying, “I will not let Vincent’s memory fade.”

Moving forward
I believe it is totally just, fair, and appropriate for Matthew to be sentenced to 6-1/2 years or even the maximum of 8-1/2 combined years of jail and prison. But what I see is the potential for good.

Mathew is still alive. He can’t change the past. But it seems he has done the best thing that he could have done in terms of taking responsibility. I don’t know all the details of whether he has properly apologized and sought forgiveness of the families he has hurt. I don’t know all that. I’ve never even spoken to Matthew, but I have heard much from him via video and also heard him speak in the courtroom yesterday.

Actually, I’m not even taking his side. Because I believe we’re not necessarily called to take sides in these situations with people, and actions, and ideologies for their own sakes, but always for a higher good. I believe we need to stand for truth and justice. With an equal amount of grace.

Jesus had the testimony of being “full of grace and truth.” We’re called to no less.

I do know we cannot influence the past. We do, however, have the future.

He has an experience. He has a message. And he’s telling it.

What is the best way we can make a real difference in the lives around us and prevent these tragic scenarios from playing out? Please comment below.

I have been considering how to best utilize this blog. I wanted to find a way to tell stories and not just write about stories. I’m still finding my way, but I am going to continue to discover how to do it by doing it. By writing. By telling more stories.